We are so excited that their rescue did so well.  It is not too late to help your local or favorite Weimaraner Rescue.  CLICK HERE to help. 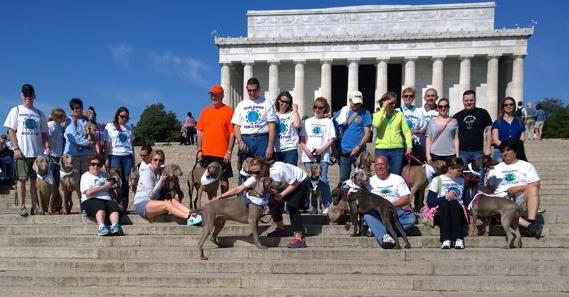 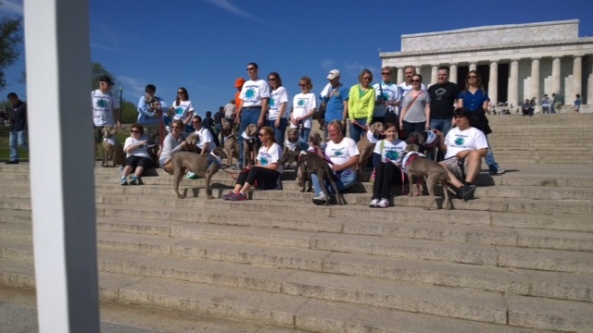 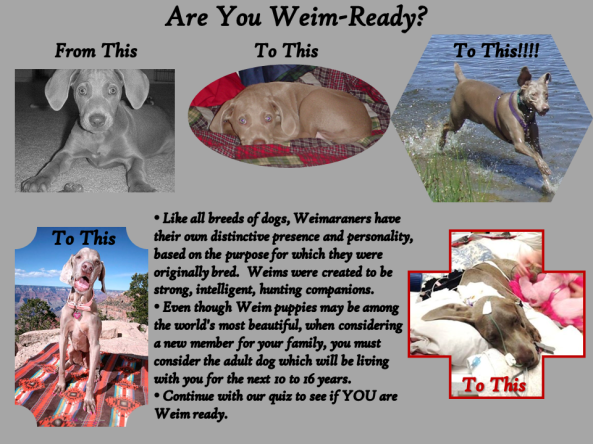 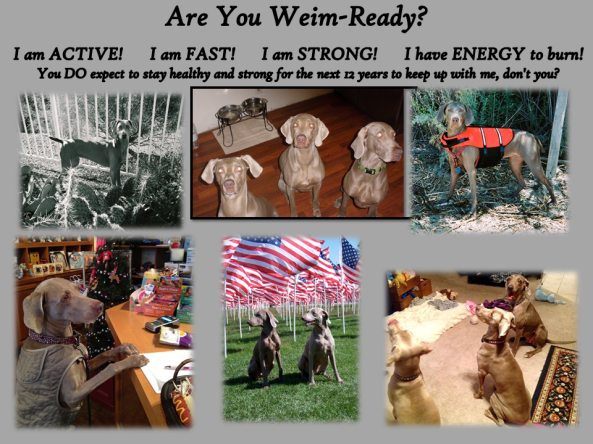 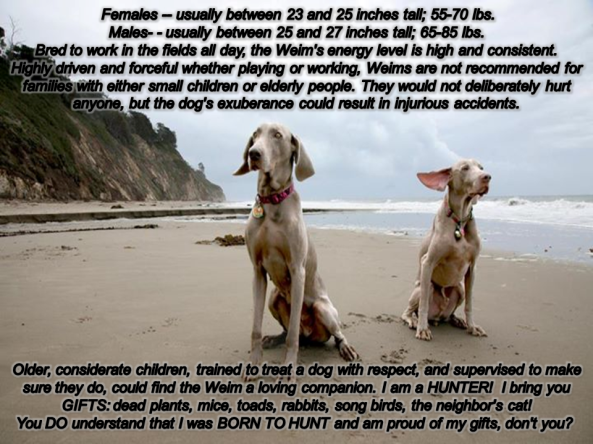 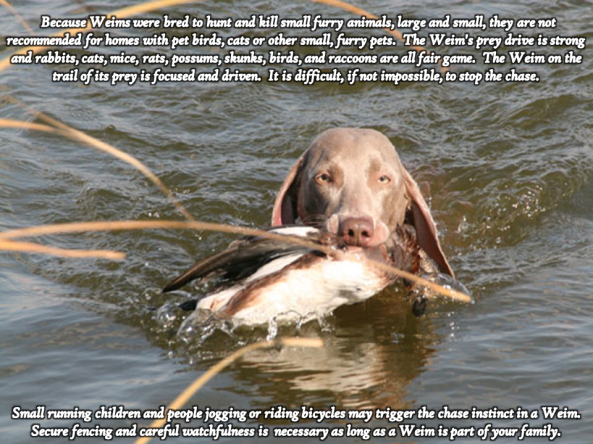 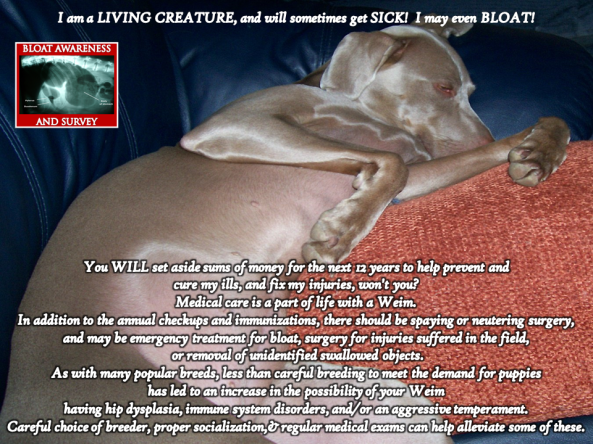 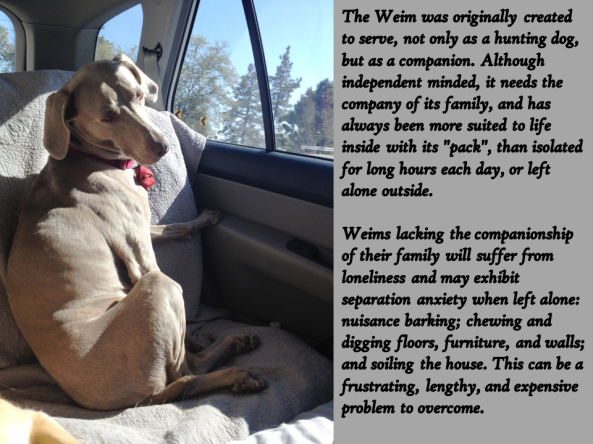 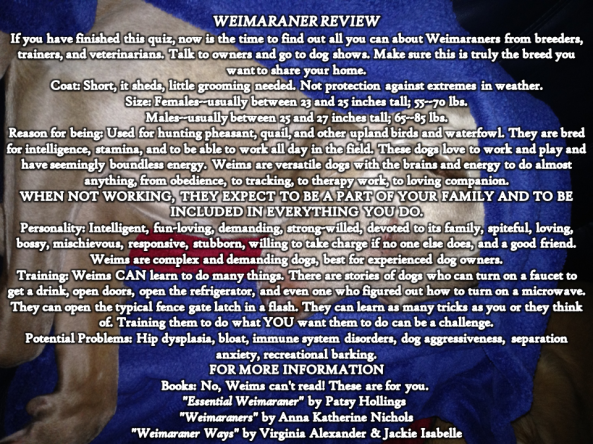 Slumber party!!!! I’ve been such a good girl at my new foster home that my foster Mom let me have a boy/girl slumber party! This picture is of Holly (left), Gilbert (in yellow slippers) and me (Beauty).

We had a great time and, given that one of us is 14 years old (Holly), one is recovering from major surgery Gilbert) and one (me) is dealing with terminal cancer, we actually slept! Nothing like those “slumber” parties that human kids have.

The doctor says I don’t have a lot of time left on this earth, but I’m enjoying the heck out of the days I have left. Carpe Diem and all.

Anybody up for popcorn and a movie marathon?

Love to you all, Beauty 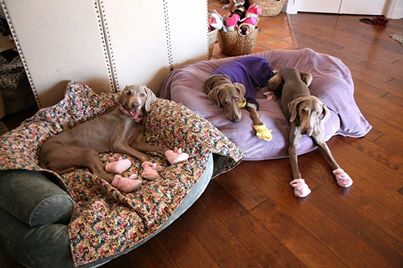 Senior Moments Weimaraners, Inc. is an all-volunteer nonprofit organization helping senior Weimaraners to have safe, full, love-filled lives.  We take in homeless Weims age 10 and up and give them love and vet care while they wait for their forever families to adopt them.

We are foster-home based, we do not have a facility.  We are only able to help these older Weims when we have foster homes available.  If you have room in your heart and home to help a senior Weim, please contact us today!

Our service area is currently limited to Michigan, Ohio, Indiana and Illinois and will expand as we develop our network of foster homes.

We are a 501(c)(3) tax exempt organization and we are qualified to accept tax-deductible contributions, bequests, devices, transfers and gifts. Please consult your tax preparer regarding how this applies to you.

We hope that you enjoy this great story about Gilbert Grape.

A Weimaraner rescued from a kill shelter has been given a chance at a normal life after having a cumbersome, watermelon-sized tumor removed from his chest/abdominal area.

A few days ago, a dog was brought into the Tickled Pink Weimaraner Rescue in New Mexico after being left at a kill shelter. They had seen bad cases before, but staff members could not believe their eyes when they saw the downtrodden dog, encumbered with such a massive tumor.

“We feel sympathy for him while at the same time we struggle with the fact he was so neglected. How could he have survived all of this time? All we can hope for any animal who is being given a second chance is that it’s not too late; this dog is no exception,” their Facebook page read.

The six-year-old was named Gilbert Grape, and the nonprofit organization took him to the emergency room. He was given pain medicine and antibiotics, and put on an IV catheter. Blood and urine were tested, and an ultrasound performed. He also needed a blood transfusion. He was made comfortable, and vets were consulted about the tumor.

“We consulted 4 veterinarians and a board-certified surgeon. The consensus is that the tumor very well could be benign, as it is pedunculated, meaning it is a stalk of tissue growing independent of other tissue. Yes, it could be malignant as well, there is always that chance. His blood work is relatively normal (with the exception of elevated white cells from the infectious, necrotic tumor) and he is otherwise seemingly healthy, even though we are aware there could be malignancy not showing up on blood work.”

Tickled Pink didn’t want to wait, and prolong Gilbert’s suffering. Their choices were to go ahead with surgery, or humanely euthanize him. It was a difficult decision, one they felt was unfair for them to make after only knowing him a few hours – who were they to decide?

“After all of our consults and a few hours of iv treatment, the Weimaraner stood up and walked towards our volunteers looking us in the eyes. We felt that he was telling us he’s not ready to go; he’s fighting to live and we want to help join him in his fight.”

Gilbert is looking much happier, and doing one of his favorite things, that he hasn’t been able to do in more than a year – lie on his belly!

Surgery it was. They began a fundraiser with a goal of $6,800 for medical expenses. People touched by Gilbert’s story rallied and nearly $12,000 was donated.

He made it through the surgery and has spent the last few days recovering. But it will take more than just rest; Gilbert is believed to have been living with the tumor for over a year, and has a hard time walking without it. His center of gravity was affected by it, and his weight distribution is unbalanced. He requires some physical therapy, but will likely learn how to walk normally.

Gilbert Grape-less is currently in a loving foster home, and some have already expressed interest in adopting him. The gratitude and sparkle in his eyes has overwhelmed Tickled Pink staff and supporters with happiness.

UPDATE: Gilbert is healing well and looking happy with his new bed and toys, thanks to the generosity of strangers who sent them to him! 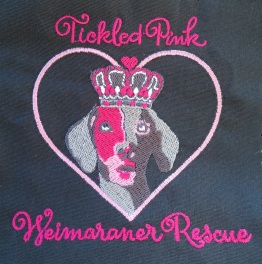 In January of 2007, right after having my first litter of babies at age one, I was taken to an animal shelter. I did not understand what was happening to me at the time, or why I wasn’t allowed to stay with my babies, but it was probably better that I was removed from the place where I was staying, because the people who kept me were not nice.

Something happened a couple weeks after I arrived, and I am not sure exactly what it was… but the shelter, which was very crowded, had an outbreak of some serious diseases, including distemper and parvo. Many dogs got very, very sick. The only way the shelter knew how to control the diseases was to put the animals to sleep, and over 1000 animals were scheduled to be put down; many of them didn’t even have the sickness, but the shelter didn’t have the room to take care of all of us.  The shelter called Jocelyn and Ronna at the Las Vegas Weimaraner Rescue to pick me up so that my friend Tucker and I would not have to be put to sleep.

(This is me the day they picked me up from the shelter. I was really sick) 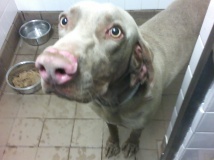 (This is my friend Tucker the same day.  See how Tucker looks now at the bottom of this article)

When we were rescued, we were taken to the animal hospital – and that was when my very nice vet, Dr. Brooks, found out that I did have distemper. If you do not know what this disease is like, I will tell you. It is very contagious, and pretty much every dog that gets it will eventually die. For me it started like a cold, and then I got a fever. I lost a lot of weight because I didn’t feel like eating anything. I went from being 80 pounds to about 35 pounds. I just wanted to sleep all the time. I was very sad and very lonely because I had to be quarantined by myself. No one could visit me because if they touched me and then touched another dog, that dog could have gotten distemper too. The room I stayed in was about the size of a shower stall. I only had a few toys to keep me company, and a few times a day I would get visits from veterinarians or hospital workers after they got off work and were done with all the other animals for the day.

For a month, I stayed at that hospital. I was all alone, and sometimes I heard the doctors outside saying that there was no hope for me. I was so, so sad. Then I met an intern named Heather who did not want me to suffer alone. She asked if there was any way I could have hospice care because I only had a couple weeks to live. She contacted her sister, my momma, because she knew that my momma loved Weimies so much.

One night, when it was very cold and I was very tired, and my eyes were almost swollen completely shut, I had visitors come to see me. These were the first visitors who came to see me since I left the shelter.  I wasn’t sure I could stand up anymore, but Dr. Brooks helped me to stand up and I tried to open my eyes enough to see them. When I saw their loving faces, I wagged my tail so much because I could not bark to let them know I was happy to see them.  They even pet me and scratched me behind my ears. It was so good to feel them touching me like their pet. I loved seeing them, even if it was only for a few minutes. That night, after they left, I hoped and prayed that they could come back and see me and love me again.

The next day was St. Patrick’s Day. I have heard that it is a lucky day sometimes, and for me it was definitely my lucky day! I had a visitor again – it was my momma! I didn’t know it at the time, but she was there to bring me to her house as her foster child so that I did not have to spend my last days alone in the animal hospital. She did not know it then, but I wasn’t going to let some silly statistic about mortality rates dictate my life. All I needed was someone who believed that I was worth fighting for, and that someone was my momma and daddy.

They made me a special space in their house with a bed and a blankie and some toys. I slept a lot. Sometimes I would have accidents, but they never got mad at me. They would take me outside to go potty, being extra careful to keep me away from any other dogs. In the beginning, I could not walk by myself. Daddy would wrap a towel around my hindquarters and hold my back legs up while we went outside so I could get around. Every day my momma would hug me and kiss me and tell me I was beautiful. I loved them so much. And every single day, I vowed that I would get better because I knew that if I didn’t, it would break their hearts.

Much to their surprise, I GOT BETTER! I started walking on my own, gaining weight again, and I even barked! They loved the sound of my voice. Weeks passed, and I kept getting better. My nose cleared up completely, and Momma and Daddy took me back to Dr. Brooks for another checkup. Everyone was amazed at the results of the test, which defied all logic and showed that the distemper was COMPLETELY GONE! I was going to be okay! And best of all, I was not going to have to stay away from other dogs anymore! I thought it was the happiest day of my life… but that came a little while later, when the Las Vegas Weimaraner Rescue asked my parents if they wanted to officially adopt me, and they said YES! 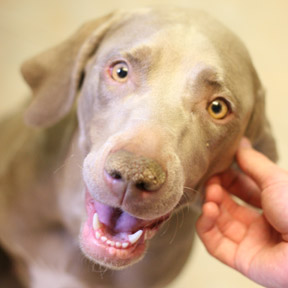 I love that my forever family brought me through my saddest time in my life and gave me a wonderful home. They always call me “Baby” because to them, I am their baby. I will always be their baby, and I will be forever grateful that they adopted me.